In film production or the arts industry such as television, theatre, or film, a casting involves the process of carefully selecting certain types of actors, singers, dancers, or extras to play or participate in a certain role or take part in a screenplay, teleplay, or script. To put it in simple terms, the cast of a script, play, or movie involves all the people who partake or act on them. To cast a certain actor in a film or play means the exercise of choosing them to play or act a certain role in it. Without cast in place, then there is no play, movie or film in place. 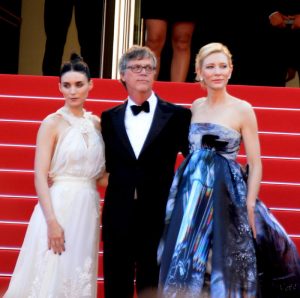 Carol is undoubtedly one of the best films ever made. There are many characters in the film with every single one of them assigned different roles. Some of the main characters in the film include Therese Belivet, Carol Aird, Harge Aird. All of these characters have their own assigned roles that they perfectly execute to make the film impressive to watch. Without cast, there would be no films. In the movie Carol, all the characters appear to be perfectly selected as they go ahead to play different roles that finally converge to make this film worth watching,

Carol is an amazing movie that has got a number of actors or cast in it. Among other actors in the movie, there are some notable characters or actors worth noting. Carol Aird features as an important character in the film. Carol appears tired and almost giving up on her marriage. She is unhappy and somehow finds love in a young woman way beyond her age. Her marriage seems to be failing terribly. She needs some love and solace, but surprisingly, she ends up finding it in another woman.

Rooney Mara also another important character in the film. Mara acts as Therese Belivet in the film and comes in as a young introverted girl with dreams and hopes of becoming a photographer someday though she cannot see what she want to capture in other persons. However, that soon changes with just a single glance that comes from a woman undergoing a difficult marriage (Carol Aird) who happens to be thrilled by Mara. Of importance to note is that it’s during the 1950s and a few days to Christmas and a period when homosexuality is perceived to be a mental illness.

Another equally important character in the film is a woman known as Abby Gerhard (Sarah Paulson). Abby and Carol were formerly lovers though their relationship was a bit brief and somewhat meaningful to Abby than it was to Carol. Abby appears to be very devoted and loyal to her friend, with viewers being exposed to see that in the film, the feeling among them is mutual. In fact, the relationship between Abby and Carol makes a lot of people wonder how deep friendship can exist between queer women. Even though Carol does not reciprocate the friendship, Abby ‘loves’ her anyway.

Carol is an amazing movie that was on everybody’s lips for the better part of 2015. It tries to highlight how it was difficult for a woman to fall in love with another woman during the 1950s when being gay was considered abnormal. Besides Carol, Abby, and Mara, there are other important characters or cast in the film who play different roles worth noting. Some of the most important characters and part of the cast include Richard Semco, Danny Mc Elroy, Harge Aird, Genevieve Cantrell, Tommy Tucker, Phil McElroy, and Fred Haymes among others.

Carol is a movie that is recommended to everybody willing to comprehend the concept of lesbianism and how two women can actually fall in love with each other. Much better, this is a movie that truly attempts to show us how hard and tasking it can be for a woman to declare her undying love to another woman in a period when doing so would amount to public shame and subsequent embarrassment.